Whether you say it’s a plane built on its predecessors,  the formerly successful Extra 330L 2.6m and 300SX 2.6m, or call it a perfect copy of our professionally matured 3.1m IMAC / EAC version just reduced in size... We think both assumptions are correct.

If you compare it with the previous 330L and 300SX, most significantly, the 330SC has received a new, much more aerodynamic cowling, fitting a larger, more pointed spinner and an even shorter canopy as well. All in all these modifications have improved the lines of the plane remarkably, but most of all, the performance.

We modelers quickly find that all the full size modifications being done to this 330SC will definitely make it a better model airplane, too. The route towards larger control surfaces, greater counter balances, more streamlined cowling and other aerodynamic parts, had been gone by us modellers for years, not to say decades. So, with other words, the 330SC is exactly what we IMAC aerobatic pilots have always wanted.

CARF-Models has consequently taken all the above into consideration and added some of the latest composite production technologies to make this all new 2.6m Extra the best in its size. Building time of this Extra should be below 30 hours, even if you are a less experienced builder. You will create a machine which will let you enjoy incredible precision as well as brutal 3D capabilities. Control surfaces are not oversized but just right. Weight/strength ratio isn’t extreme, but just right. And the fun factor is going to be UNLIMITED!

Furthermore, the rigidity of a CARF-Models design will guarantee fun and joy for the whole season or two, or three, without glue joints falling apart, monokote wrinkling and coming off, fuselages getting twisty and wings getting soft. Improved gear mount, engine mount, servo mounts, canopy and cowling attachment points, are made to last for many years of trouble free operation, if the installed equipment is maintained well over time.

Get hooked. The best 2.6m Extra of all times even got better! It IS going to be your dream-flagship of the season.

Because of the streamer-like curves, we call it the "Skydancer Scheme". This scheme also bases on a full scale design, but we changed the colors and some lines to match. Black and 2 different silver tones make a very classy appearance, and one bright color jumps out at the pilot. Stock schemes will feature Magenta, which is the color of choice for our CARF-Models Logo. 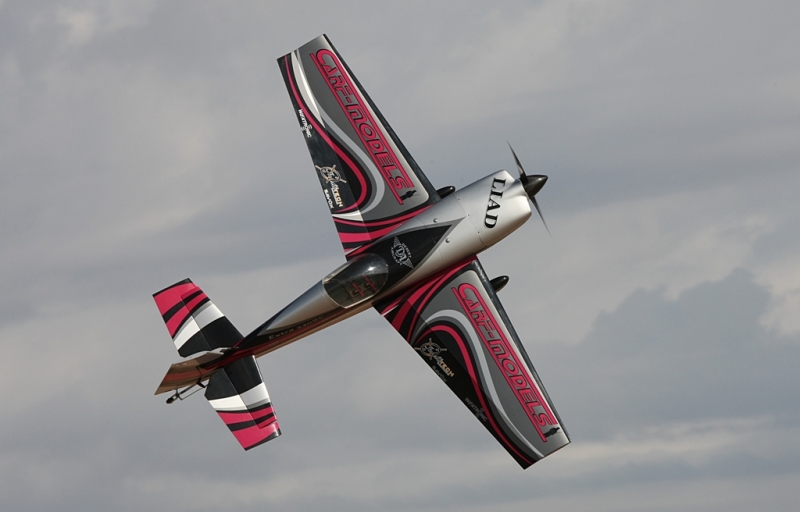 The most difficult decision for the team of designers and the team pilots involved, was whether to go with the center hinged ailerons or revert back to the skin hinge. It was a very hard decision to make... We went back to skin hinge and here is why: Wing weight! The lighter the better. No deflection of the world and no center hinge symmetry can compensate for a heavier wing. Instead, we have moved the outer aileron servo further inside and designed the skin hinge spars and slots in a way to have more throw than ever,  allowing slight differential to compensate for the hinge line in the top skin. The result is an ultralight wing with an aileron allowing more than 30 deg deflection to both sides and driven redundantly by 2 servos. The outer servo has been moved inwards, to further move weight from towards the center of the plane. This results not only in highest roll rate, but also even further improved snap-and-stop performance. Modified angles of attack of wing and stab reduce the knife edge mixing.

The elevators have received full size counter balances. Stab halves are prepared for the drop-in of one standard size servo per half. The rudder trailing edge has been widened to create much better slow flight and high alpha characteristics, at the same time provides smoother reactions at high speeds without reducing the impressive rudder authority. A rudder servo tray for two servos is included as well. 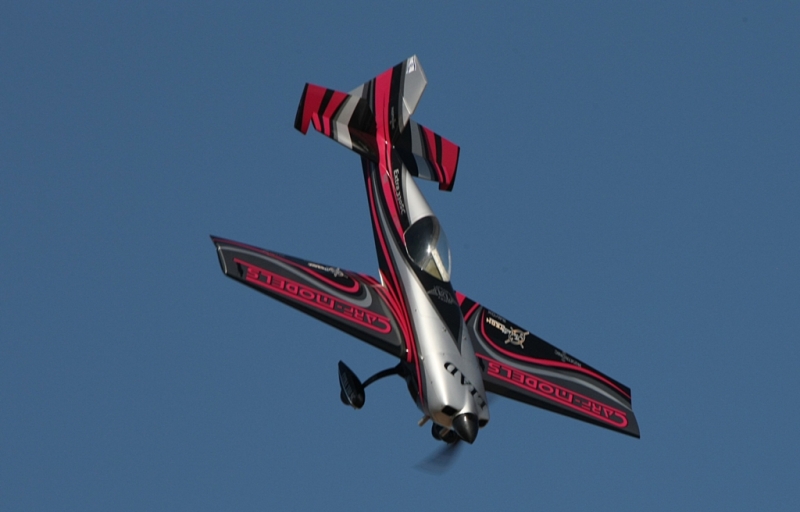 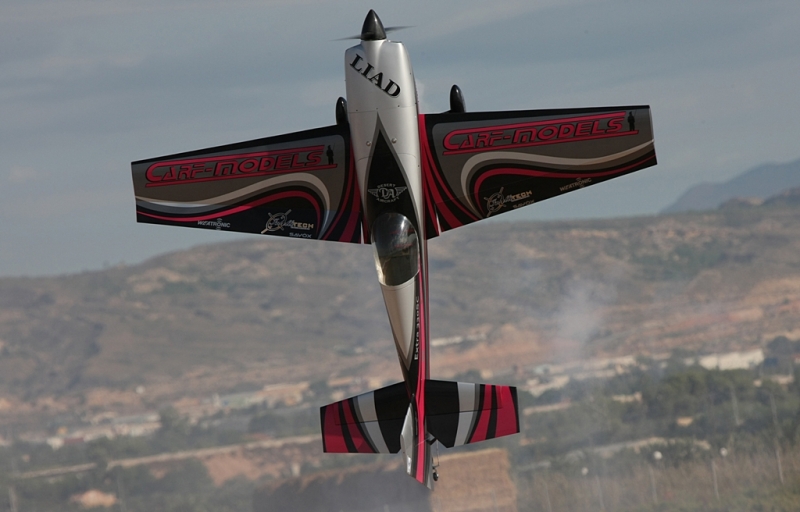 The fuselage is very wide and pretty scale. It has the proper cross sections from cowl to tail, so that the shape itself makes it already very stiff. All is sandwich laminated and the two crucial formers behind the cockpit and inside the fin are installed in the molds, too. The gear mount is a strong aircraft grade plywood piece, glued in and reinforced with glass and carbon where necessary. The new style, two-part cowling is large, gives room for any 100-120 cc twin cylinder engine. It is already fitted, mounted, bolted in place, just like its larger counterpart. The fuselage's internals are designed so that a pair of canisters will fit without problems, even mounting formers for various sizes and types are included in the kit. Especially the landing gear mount has been lowered to give more room. It not only comes with streamlined wheel pants, but also with production style gear cuffs, to make the appearance more scale. 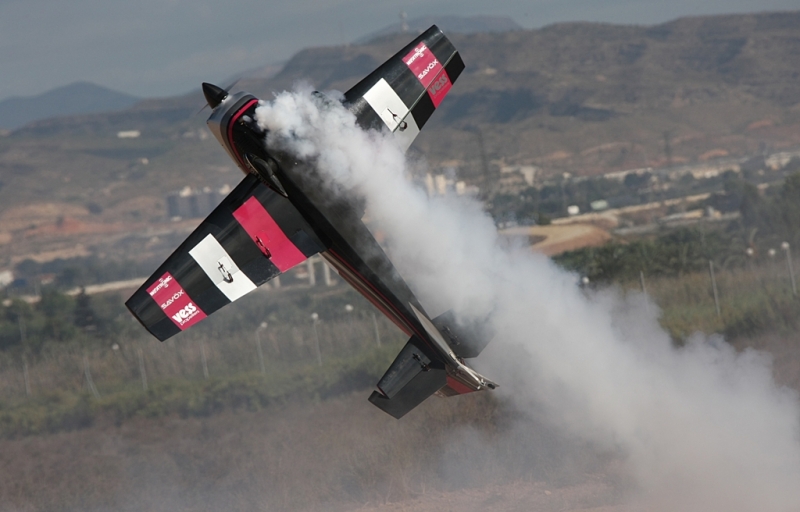 For its size the Extra 330SC is remarkably light. This is felt in the 3D maneouvers. The plane acts very stable even in positive high alpha maneouvers. The authority of the controls, especially the ailerons, is sensational for a skin hinged setup. The candid tail moment is responsible for the Extra's agility and maneouverability in 3D. However, for the sequence flying, it's a proven fact that without any change of settings (except rates reduction) the CARF-Models 330SC, just like its predecessors, will become a perfectly tracking aerobatic machine, straight like an arrow, with well balanced control authority. The lighter wings have even improved the snap/stop characteristics and the wide trailing edge on the rudder lets the plane feel more stable and calm. A 100 - 120 cc flat twin engine on canisters has so much power that a quiet 3-blade prop can be used, without having to fight for the last percent of engine efficiency. Finally, it is going to be only you, the pilot, who will limit the peformance of the airplane, and that is a challenge which will keep you going strong.

Building time of this Extra should be below 30 hours, even if you are a less experienced builder. You will create a machine which will let you enjoy incredible precision as well as brutal 3D capabilities. And the fun factor is is going to be UNLIMITED!

Get hooked. The best 2.6m Extra of all times even got better!

Customers who viewed this product bought